"How Do Dinosaurs Go to School?" such a fun back to school book! The dinosaurs show kids the right and the wrong way to act when they go back to school. This fun book needs a fun, easy snack! Dinosaur waffles are just the thing. 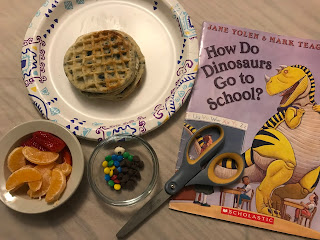 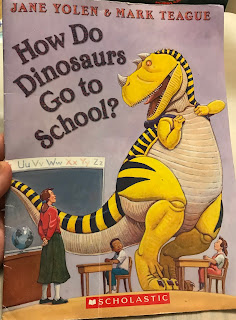 For each dinosaur you need:
-2 toaster waffles (or homemade waffles if you would rather)
-chocolate chips, candy eyes, or M&Ms
-strawberry slices, mandarin orange segments, banana slices etc...
-CLEAN kitchen shears (no really!!) 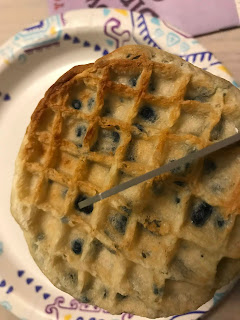 Start by cutting the waffles in half to make 4 half circles. Cut two of the half circles into triangles, rectangles, etc... Leave one half circle intact, and cut the last one into two bigger triangles to make a tail and a head/neck. 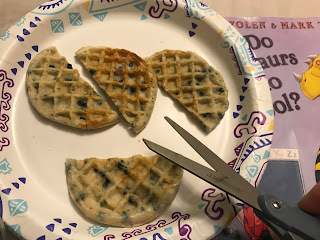 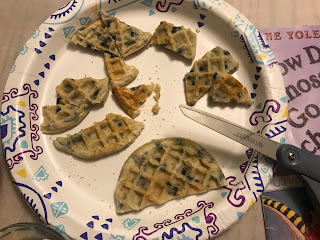 Using the intact half circle as a body, have your child assemble a dinosaur. This can be done in a number of ways. Decorate using fruit slices or other waffle pieces to make eyes, spikes, horns, etc... I've included a few examples, but let your child use their imagination to create their own way. 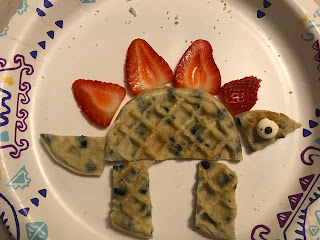 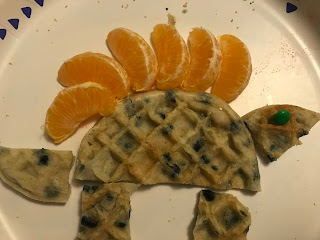 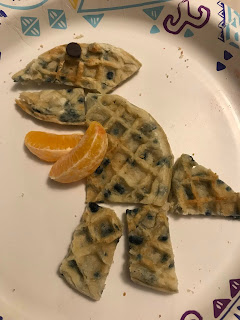 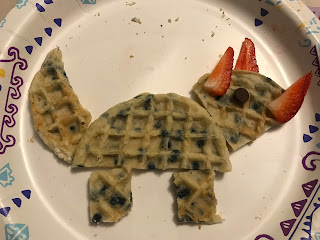 Eat! This is a fun breakfast, or after school snack! Can be served with syrup, other toppings, or left plain.

*Having some of the prep done (strawberries and waffles cut) will make this art quick and easy!
*When cutting shapes, keeping them "general" will allow your child to be more creative.
*Don't like waffles? These could be made with pancakes too!!
*This same idea could be used to create animals or things! Waffle elephants?? Sure!
*As always remember-
You are making memories, not masterpieces!

My name is Angela Eckhardt. I am a kindergarten teacher, literacy lover and art nut. I am a firm believer that art for kids should be about the process more than the product! MEMORIES NOT MASTERPIECES!